This year, students at Berlin HS fostered jellyfish for the Via Aquarium.  The work was part of an independent study course supervised by science teacher Matt Christian.

As part of their independent study work, Vicky Scott, Parker Crandall, Hailey Madsen and Domnika Popov raised 7 jellyfish during the 2017-18 school year.  The jellyfish were donated by the Via Aquarium and were delivered to Berlin high school as polyps.

The ephyra were fed brine shrimp eggs which the students prepared each afternoon for the following day. To prepare the food, students mixed shrimp eggs with saltwater in a tub fitted with an airhose filter to grow overnight.

When the jellyfish reached the medusa, or adult stage, they are ready to be returned to the aquarium.

As a culmination to this work Mr. Christian and the four independent study students visited the aquarium on April 11 to deliver the jellyfish.  While there, the students were able to meet with the aquarium staff and take a tour of the tanks.

The independent study course is an extension of the school’s marine biology program and allows students who have additional interest in marine biology to learn more.

The marine biology program is unique to Berlin HS and it is the only course of its kind in the surrounding area. In the course, students engage in advanced science work and collaborate to  solve problems.

Matt Christian, the science teacher at Berlin MS/HS who initially developed the marine biology course, said the district has been supportive of the endeavor since he began working for there more than 10 years ago. 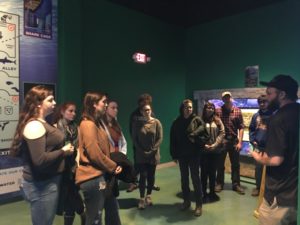