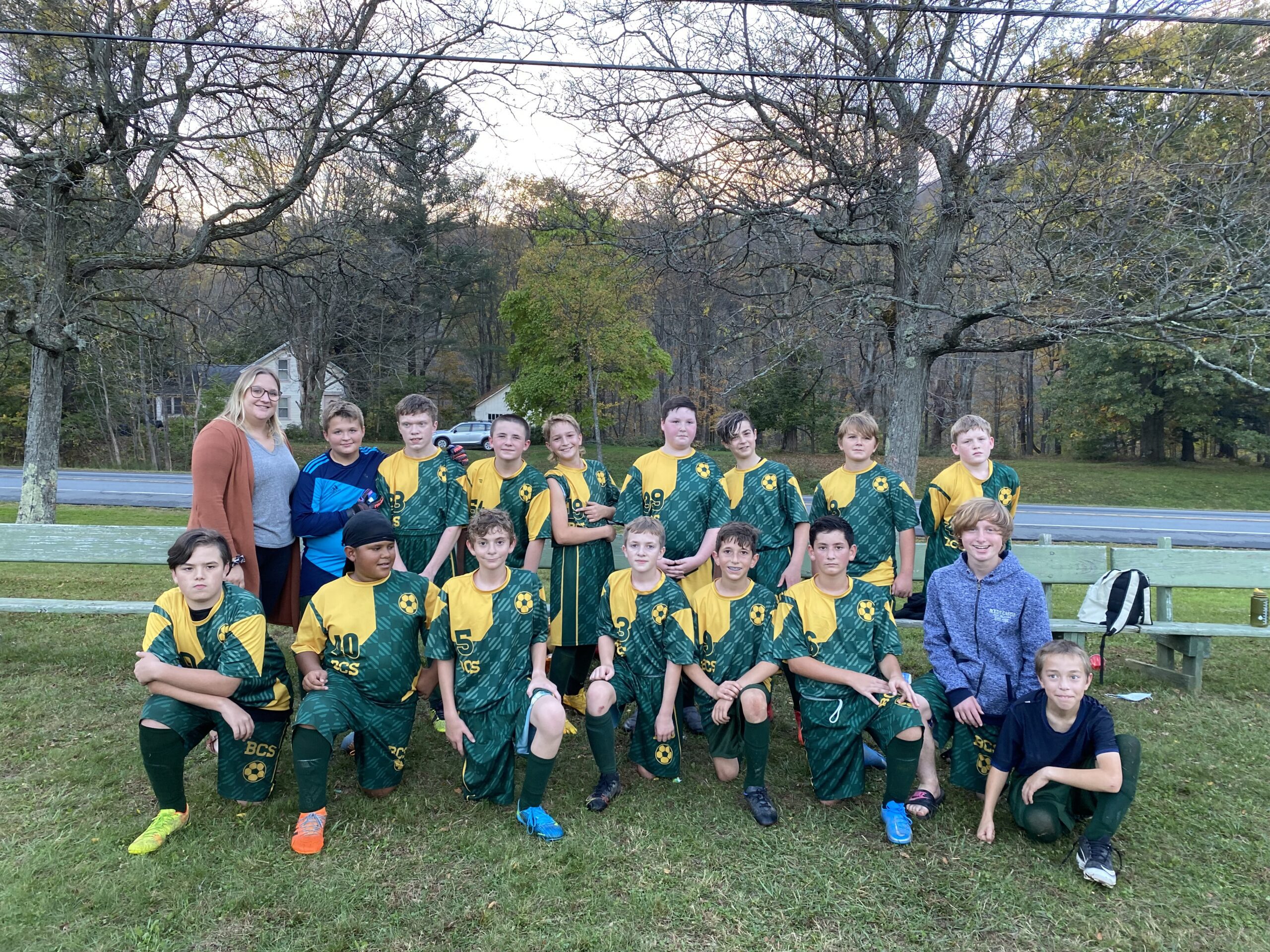 Girls modified volleyball came out last night to prove a point. Sometimes you lose and sometimes you crush it! The B team started their match with a loss getting stuck by a great server. Didn’t matter. They came back to win the next 2 sets with consistent receiving, serving and great teamwork. Jade Baldwin was the player of the game. The A team started with a loss too. They came back with better communication and a more focused effort to win their next 2 sets. Mackenzie Walko was the player of the game. The girls will play a combined match against Waterford on Wednesday. Your last chance to see them play will be on Monday against Cambridge.

The BNL girls varsity soccer team ended its season strong on Saturday 10/16, with a 2-0 win over Cambridge to celebrate their senior game. In an impressive performance, BNL locked down the opposing Cambridge offense in the first half, and worked hard to disrupt their opponent’s possession of the ball. The second half, BNL really gained momentum, and began to apply pressure to the Cambridge goal. Jessica Bosso took the lead for BNL scoring her second goal of the year after making a smart diagonal through run to get in 1 v 1 with the keeper. Riley Robertson scored her first varsity career goal in similar fashion to make the score 2-0. Despite Cambridge being awarded a penalty in the box, keeper Becca Madsen stepped up big to save the spot kick and keep the clean sheet for BNL.Coach Kanofsky and Day want everyone to know how proud they are of this group, and how excited they are for the future of the program! Congratulations to Berlin Senior Sophie Ericson!

This weekend the Girls and Boys Varsity XC Teams laced up their spikes and took on the Burnt Hills Invitational @ SPAC that hosted 28 schools total! But, no worries! The BNL small-school spirit was mighty! This course holds a very special place in the hearts of our veteran runners and they were READY to be back in the action. The pre-run jitters and dancing were at an all-time high before the races began.

The Girl’s Varsity BNL team started off the excitement with an incredible race. All of our girls were hungry for the PRs, medals, and trophies to come. First up, Elsie Corbett and Allura Meizinger came into the finish line with an incredible stride after racing against other teams that they had been competing against the entire season. Elsie came in with a fantastic 7th place and a time of 20:44. After a hard fought battle with a Greenwich girl, Allura was right on her tail taking 9th place with a 20:54. Brady Hills accomplished an amazing feat by beating their PR with a 21:21 and taking 14th place. Special shoutout to Ava Noel who looked incredibly strong out there on the trail. For her first time ever on the SPAC course, she came in 28th place with a 23:02. Another special shoutout to the girl who ended a close tie breaker, Elaine Savaria! Elaine ran a 26:58 coming in 71st place. All of the girls made incredible accomplishments out there for themselves and for their team. The girls came in 2nd place as a team for Division I. Way to go BNL girls!

The Boys Varsity Team was all warmed up and ready to go after witnessing the intensity and excitement of the girl’s race. It was their time to shine! We couldn’t believe our eyes when we saw Gabe Kalisz sprinting into the finish line with a 17:47 in 17th place! Looking as strong as ever, Matt Kluck also came in with a 19:05 taking 45th place. Coming so close to a sub-20 race, Aidan Vandyk ran in with a 20:21. For their first ever large-scale invitational, Lance Shroder and Eben Donohue did not let the nerves get to them. They kept the heat coming with a 22:17 (Lance) and a 23:07 (Eben). As always, our runner who is well-known for his all-out sprint finishes, Carl Truax with a 25:53. The boys team took home 11th place out of 19 for Division 1.

Watch out as BNL takes on SPAC again for sectionals coming very soon!