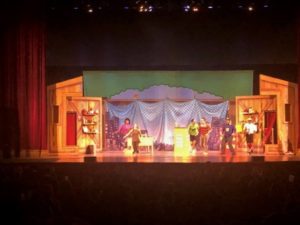 Third graders at BES took a field trip to the Palace Theater on November 20, to see Dog Man: The Musical. The hilarious musical is based on the bestselling Dogman book series by Dav Pilkey, the creator of Captain Underpants. Dogman is very popular with students at BES and the musical was a hit as well. Students Austin Amuso and Nolan LaPort share their reflections on the day below. Thank you to the BES PTO for sponsoring the field trip.

Today I went to the Palace Theater in Albany, to see Dogman. It was a blast!

Today I went to see dogman and it was an amazing show. It was in Albany, NY at the Palace Theater. My favorite character was the cat because he is funny and evil, but turns nice at the end of the show.  First the cat put a boom down and it blew up! A police and a dog, then the doctors came and put the dogs head on the police officer’s head and that made Dogman. Next, the cat was worried because Dogman was strong. Finally, the cat made a clone that was nice all the time and he was mad that the clone was happy. Last, the cat met a fish and the fish was more evil than the cat.  The fish turned city building into monsters and Dogman saved the day. My favorite part is where the cat threw a bomb.