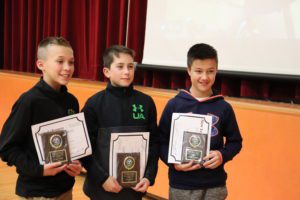 Coaches Dan Bentley Modified, Maria Sime and Nick Toole JV  and Art Schmich and Bob Gould Varsity, all spoke with pride about how well their teams merged and worked together to make it a successful season for all.

Thank you to the newly merged Berlin/New Lebanon Booster Club for all their support and hard work.

Congratulations to all the student athletes and parents from both district on an excellent season. See more photos here.