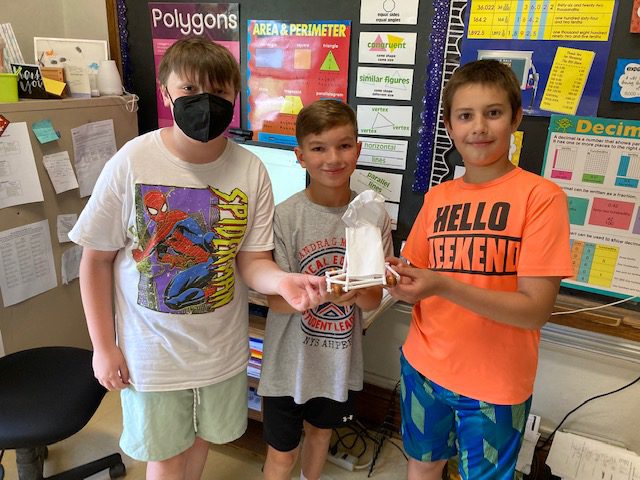 As an end of the school year project in Mr. Turetsky’s fifth grade math class, students were asked to design and build their own puff mobile in groups of two or three. Puff mobiles are vehicles that require a puff of air in order to move. The puff mobiles were built using four beads, ten straws, a piece of paper and an unlimited number of pins to connect the parts together. Once students designed and built their puff mobiles, they competed in a distance competition within their own homeroom. Each group designated a puffer to move the vehicle. The puffer moved the vehicle three times and the average distance was recorded. Here are the winners from each class who had the longest average distance and the names of their puff mobiles. All the 5th grade Mountaineers did an excellent job with their designs and teamwork.
Noah Moshier and Owen Mendoza-The Classic Car
Isaiah Bonesteel, Anthony Catricala, and Ben Maxon- The Cruiser
Anthony Williams and Jacob Schoeffel- Chicken
-Mr. Turetsky 5th Grade Math Teacher