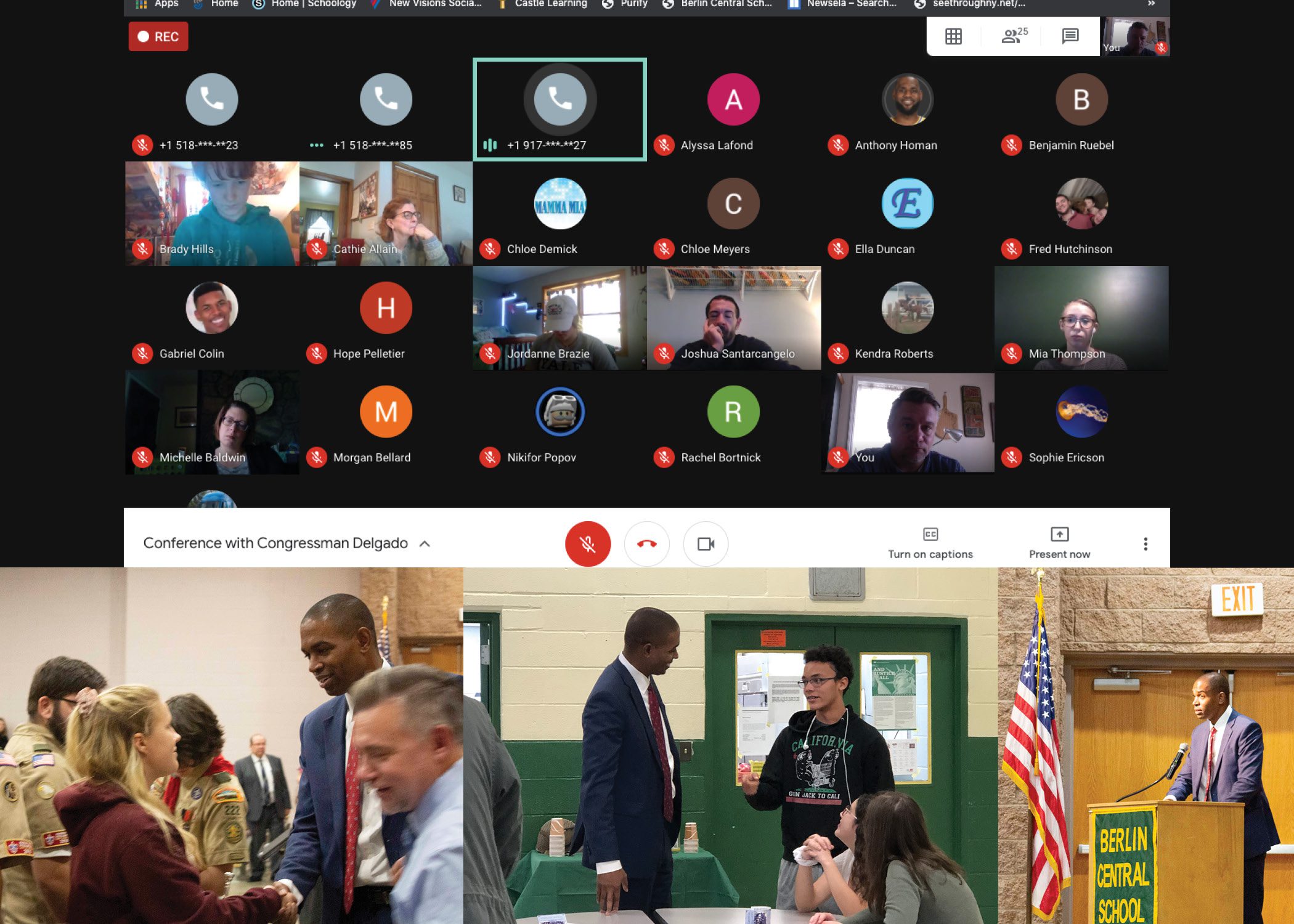 The teachers of the Berlin Central School District thrive in classroom settings. They track miles in a day pacing their classroom floors as they give animated lessons, content lectures and hands-on learning.

In this time of remote learning at BCSD, however, teachers are left wondering if their fitness trackers work anymore. And have they really been sitting at their computers for that many hours!

Teachers are having to rethink teaching methods and media and create new ways to reach their students. This means engaging students via many different platforms. One of these platforms is the virtual class meeting and, as always, teachers are getting creative and resourceful.

This creativity was on full display in the past week. On April 15, Mr. Joshua Santarcangelo’s US History class and Mr. Robert Gould’s 10th-grade honors Global Studies class had a special guest drop into their virtual classroom. Principal Dr. Cathie Allain and Director of Curriculum Instruction and Assessment Mr. Fred Hutchinson were also in attendance when Congressman Antonio Delgado joined in.

The class got underway with Mr. Santarcangelo welcoming Congressman Delgado, who represents New York’s 19th Congressional District, and asking if he was comfortable giving the students the floor during their time together. The congressman said he was very glad to do so.

Mr. Santarcangelo also gave Congressman Delgado context as to where the US History students were in their studies.  The students had just finished talking about the emergency stimulus package of 2008 and had recently tackled the time period of the Great Depression. Making connections between these times in US History and what is happening during the current pandemic was the basis for their questions.

Congressman Delgado’s virtual visit could not have been timelier to respond to the student’s questions about the pandemic, the issues that affect living in a rural district, and how we are to move forward and deal with the new normal.

The chance for the students to ask questions so candidly of a serving congressman may not have come up so readily in previous times when social distancing and stay-home orders were in not place.

Both Mr. Santarcangelo and Mr. Gould saw this as an excellent opportunity for their students to engage with history as it is playing out in real time.

How can we as New Yorkers in the 19th Congressional district help those who are on the frontlines of the pandemic?

How will the government make sure that taking care of EMTs and paramedics remains a priority, and that they will remain to be seen as essential to society long after the pandemic?

Should the government take a more strong-handed approach towards controlling the economy? Should it ensure that big business is not the only business looked after during times of crisis and economic decline, and that small businesses are not swept under the rug?

At the onset of the pandemic could the current circumstances ever have been imagined? Does the response to combat it now have only a limited capacity?

Mr. Hutchinson posed the last question, bringing up a concern that many families and teachers are struggling with in the district:

“For schools this is a particularly challenging time in the realm of equity,” he said. “What is the environment on Capitol Hill suggesting in terms of infrastructure? I ask this specifically in relationship to high-speed internet access in rural districts like ours.”

Congressman Delgado responded that in the next stimulus package Congress is working on, he wanted to focus on rural communities in particular when it comes to computer infrastructure and broadband access specifically.

“What kind of inequity are we willing to tolerate?” asked the congressman. “Because we are leaving communities behind, [while the internet] is a basic utility at this point and it would be like living without electricity after a while.”

He continued: “It is very important to make sure our schools are upgraded and have the proper infrastructure needs met to make sure all of our students across the country, no matter where they live, can access information, learn, grow and prosper.”

After the question-and-answer period, Mr. Santarcangelo was very impressed with his students, saying their questions were thought provoking. He thanked Congressman Delgado for once again giving his time to the Berlin CSD.

Congressman Delgado replied, “I am so happy that I was able to talk to all of you and take your questions. I really appreciated the time and effort you are putting into learning, and I do hope you found this informative.”

The congressman concluded by encouraging the students: “Continue to do what you are doing, stay disciplined, continue to educate yourselves and be responsible. It is a real honor to be your representative in Congress, all the best and stay healthy and stay safe.”

“Mr. Delgado spoke to our students how you would want someone to [in order to] address their concerns,” said Mr. Gould, adding that the Congressman did so “with thoughtful understanding, expressed his position, and clarified it so each student could understand it.”

“He spoke to them like the young adults they are becoming. It was really wonderful.”