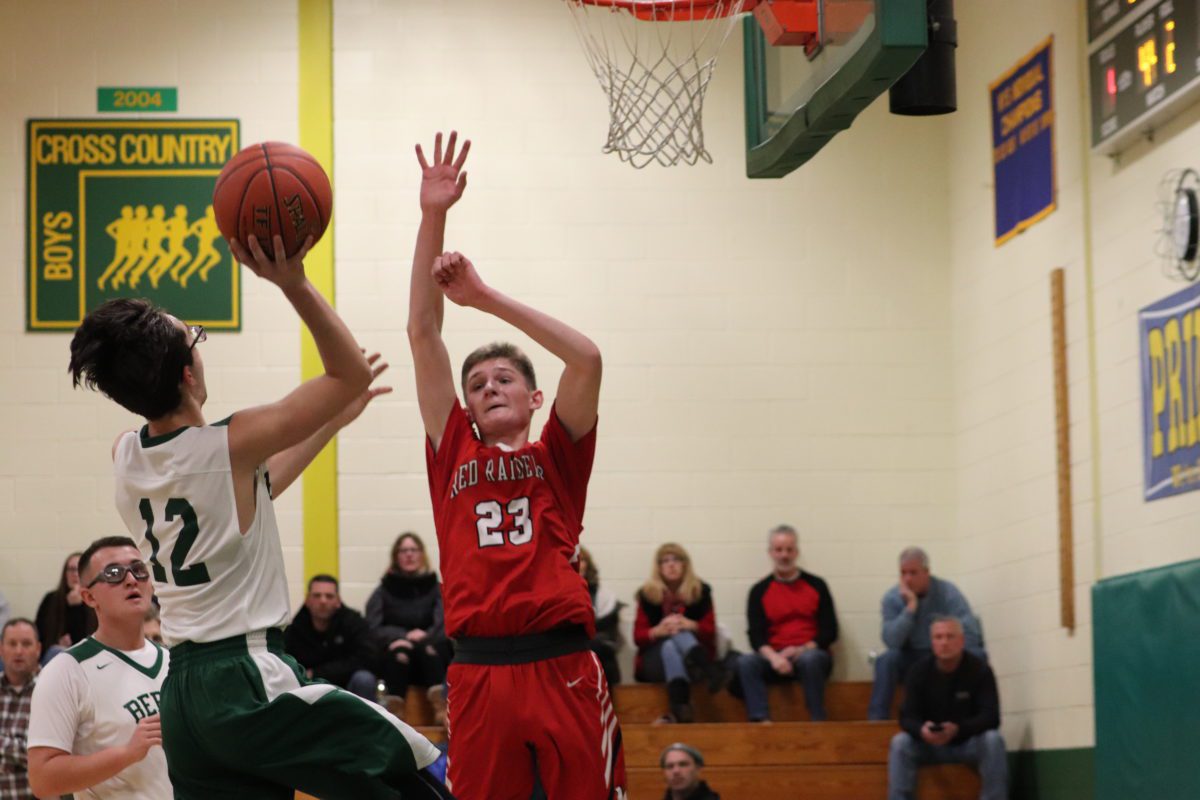 Come Out and Support Our Student Athletes!

Attention:  Spring sport season sign-ups are out in the locker rooms and cafeteria. Please sign up early so Mr. Weaver can determine if Modified, JV and Varsity teams are needed

Berlin/New Lebanon Boys Modified Basketball A team lost 71-37 on Saturday to Stillwater. Chris Shorter lead the team with 14 points but that was not enough as the defense was no match for Stillwater’s offensive attack. They play today at Cambridge, good luck boys

Berlin/New Lebanon Boys Modified Basketball B Team lost a hard fought game on Saturday to Stillwater, final score was 34-28. Anthony Ray and David Bink used some nifty ball skills to maneuver to the basket and make some impressive contested layups. Anthony Ray lead the team with 11 points and David Bink followed with 7 points.

The Girls JV Basketball team faced Stillwater Friday.  The girls kept pace until the 4th quarter when the Warriors leaped ahead for a 26-40 win. Sam Rokjer lead Berlin with 10 points followed with Bri Reger with 8. Kenzie Krause was able to come up with numerous steals caused by the guards, Tatum Kells’ and Sam Rokjer’s half court press. Sophie Ericson closed down the top of the key on defense and Bri Reger had 9 rebounds.

Girls Modified Basketball played the modified Stillwater team on Saturday morning.  From the beginning, we struggled to find our rhythm. Offensive rebounding was lacking and baskets were hard to come by.  Overall, we played a good defensive game, but anytime we faltered, Stillwater pounced.  We lost but played hard from beginning to end.  High scorer was Hailey Armold with 2 buckets.  Lilly Gardell, Rebecca Madsen and Anna Hart each sunk 1 and Rilynn Jones hit a foul shot. We face Tamarac’s A and B teams on Tuesday at New Lebanon.

Congratulations to Ben Doyle and Madison Casey who won their first wrestling matches of their career last Thursday against Maple Hill. This past Saturday the varsity wrestling team travel to taconic Massachusetts to compete in their first individual tournament of the year. Anthony Prather, Jake Harrison, and Kevin MacVeigh all place top 5 in the tournament. After losing his semi-final match Jesse Cameron fought back to take third place in the tournament. Finally, Josh Wescott pinned his way to the finals of the tournament and despite a wardrobe malfunction he was able to make quick work of his opponent to be named the champion at 152 pounds.

Congratulations to the bowling team on their first match win of the season! All of the bowlers worked hard and secured some clutch shots to win the match 4-1 over Waterford-Halfmoon. Cody Hunt led the charge, shooting 154, 164, and 151 for a 469. Sierra Pettibone had a high game of 148, Jordanne Brazie had a 141, Rhiannon Dawes a 137, Danny Hunt a 130, and Jacob Brazie a 122. The JV bowlers also threw some impressive games – Micayla Price was high with a 141, Logan Dunlop had a 137, Alex Reinhart a 121, and Paris DeFilippis a 102. The team has two more regular season matches, both at Barbecue Recreation, on Tuesday and Thursday next week. If you’re free, come see these bowlers in action as they continue to strike it up!

It has been a busy week for the Berlin New Lebanon ladies. The BNL team is really starting to find some success as they continue to work together. On Monday 1/6 they faced Loudonville Christian in a tough battle that saw strong games from Nora Colin, who scored 4 points and did an outstanding job crashing the boards for rebounds. Arianna Hendricks added 4 points while increasing her stats in rebounds and assists. After a late start joining the team following a great Cross Country season, Arianna has become a great addition to the team both offensively and defensively. Even though we beat them at home during Mountaineer Madness, we dropped to them at their house. On 1/8 Berlin New Lebanon ladies hosted the Saratoga Catholic Saints in a tough battle that went back and forth finally ending in a Saints win. Nora Colin continues to add points to the scoreboard dropping in 5 points and Arianna Hendricks added a bucket of her own. Both girls had numerous steals, rebounds, and assists to keep it a close game. Kianna Flavin continues to grow as a defensive player shutting down shooting opportunities and forcing the other team to turn over the ball. Tonight the BNL ladies travel to Stillwater.

Congratulations to Madison Casey and Ben Doyle on their first wins on the modified level… Despite the loss the Berlin New Lebanon wrestling team came ready to give it their all against Maple Hill on Thursday. Win’s from Shane Sprague, Joshua Wescott, Jesse Cameron and Kevin MacVeigh were not enough to secure a win.

Girls modified basketball played the small but strong Saratoga Catholic team yesterday. We started off the 1st quarter down by 6. We came back and dominated in the 2nd. We traded buckets back and forth in the 3rd and again rallied in the 4th. High scorer was Riley Robertson (NL) with 12 points, followed by Rilynn Jones (B) with 9. Nikki Minkler (B) and Katelyn Miller (B) had 2 buckets each. Sophia Hart (B), Tallulah Powers (NL), Hailey Armold (NL), and Brianna Scott (B) rounded out scoring with 2 points apiece. Final score 37-20. We play Stillwater this Saturday at their house.

The JV girls basketball team beat Spa Catholic 29-24. The girls played well and clinched the game in the 4th quarter out scoring Spa 10-4. Acelyn Plouff had a great game defensibly leading in steals and rebounds. Sam Rokjer had 10 points and 3 blocked shots and Hannah Mace had 5 points. Bri Reger scored 2 points and had 2 blocked shots and 5 rebounds.

The boys JV basketball traveled to Saratoga on 1/7.  Right out of the gate the boys showed they came to play and make a statement. Going into the 4th quarter the game took a turn and the team had trouble hitting their shots and communicating on the floor. The boys managed to keep the game tied and send it into overtime. At the final buzzer the team fell short 2 points. Kristjon Culbertson (Berlin) scored 20 points, Gage Willis (Berlin) put up 19, and Mason Stalked (New Lebanon) added six. The Boys host Stillwater this Friday.

The bowling team continues to improve and showcase new skills each match, setting a new high team-score of 2,349 on 1/7 in Saratoga. After shooting a 144 while he figured the lanes out in game one, Cody Hunt led the team with a 543 series, scoring a 201 and then a 198 in games two and three. That’s not only Cody’s personal best, it’s the high individual series of the season! Helping out with the tremendous team score were teammates Sierra Pettibone, Danny Hunt, and Jordanne and Jacob Brazie. Sierra shot a high of 160 during game one, following with a 136 and 125 for a 421 series. Danny had a high of 154 for a 376 series, Jacob had a 128 high for a 348, and Jordanne had a 129 for a 346. Mica Price stepped up to a varsity role for game three, and Paris DeFilippis had a nice 129 game on JV. Great scores bowlers, keep the strikes coming!

After a long holiday break the wrestling team took the mat against Catskill. Despite wins from Kevin MacVeigh, Jake Harrison, Shane Sprague, and Anthony Prather, the team was unable to defeat Catskill to earn their 5th win of the season.

The girls JV basketball team played Waterford losing 28 to 33. It was a close game with the lead switching back and forth between the teams until the end. Aliyeah Rodriquez was high scorer at 13 followed by Bri Reger with 9 who was also the top rebounder. Kenzie Krause had three blocked shots.

The boys Varsity Basketball team visited Loudonville Christian on ⅙  and played a very close game. After coming out rusty in three quarters of the game, the team rallied behind good defense and even better offensive sets to come within 2 points by the end of the game. The final score was 43-41. Scoring was led by senior Shawn Pawlows with a game high 22 points.

Shoutout to Cody Hunt for shooting a 226 during bowling practice yesterday. The game is the new high for the team and shows just how hard the new team is working! During a pair game Cody was partnered with his brother Danny and the duo shot a 215! The Hunts aren’t the only ones showing promise, everyone on the team has improved tremendously over the past few weeks. The team travels to Saratoga today and then sees Waterford-Halfmoon on Thursday in what promises to be a close and exciting match. Good luck bowling team!

On 12/19 the Berlin New Lebanon wrestling team went to battle with Taconic Hills to try and secure their third straight victory. They started off strong on a 24 point lead with victories from Shane Sprague, Jared Cook, Anthony Prather, and Josh Westcott. Taconic Hills then went on a run to defeat the next 5 Berlin New Lebanon wrestlers. After a forfeit to Jesse Cameron the score was tied 30 to 30. Sarah Roy had the crowd standing on their feet as she wrestled, trying to earn her first career varsity win but fell just 30 seconds short. In the end a forfeit to Josh Zlotnick and a match clenching gain by Jacob Harrison would secure a 42 to 30 victory over the Taconic Hill Titans.