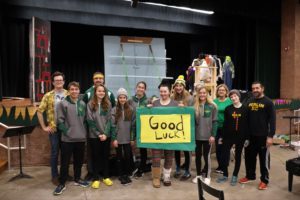 For the first time in Berlin Central School’s history they have fielded an entire Cross Country team to the State Championships after winning Sectionals.

Thank you to Ken Masterson from our transportation department for bringing the athletes to Latham Friday morning where they joined other teams from our region on a charter bus to Plattsburgh. 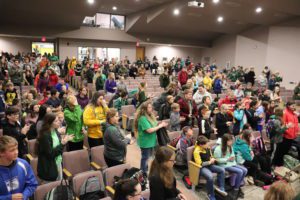 Coach Josh Santarcangelo brought this report back to the Proud Mountaineers at the Berlin Middle-High School, who were rooting for the runners back home.

In the frigid cold where temps never went above 20 degrees the Cross Country Varsity Girls team and Collin Douglas ran well against the best in the state. Collin ran first and quickly lost a shoe within the first 400 meters he then ran the majority of race with one shoe. Collin somehow finished in a time of 17:38 showing his strength and determination and why he has been a leader on the Cross Country team for the past couple of years.

The girls started slow but came on strong in the second half of the race as Elsie Corbett led the way finishing 20th earning a State medal. The girls finished 4th overall defying projections once again and saw strong runs from everyone.  Hailey Beckwith had a personal record with a time of 20:08, Sadie Giumarra who once again lost a shoe in a race and Brady Hills finished under 21, Sam Rokjer who slid down the first muddy hill finished just over 22, Ariana Hendricks broke 24 for the first time all year, and Jordan Shupe who received the Section 2 Sportsmanship award on Friday night saved her best race for last finishing in 24:48.

It was a great way to end a historical season and a season that will not be forgotten for quite some time.