Berlin MasterMinds compete in their first meet of the season 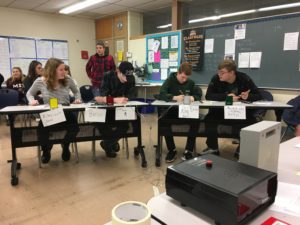 Berlin High School fields a Junior Varsity and Varsity MasterMinds team each year as an extracurricular opportunity for students to represent their school in an interscholastic setting.

Founded in Rochester, NY in the fall of 1993 with just 25 schools participating, MasterMinds has expanded throughout New York and divided into eight regions with about 70 schools competing. Berlin High School participates in the Albany/Capital District (Section II) region and is in a league with Brunswick/Tamarac, Hoosick Falls, Berne-Knox-Westerlo, Troy and Academy of the Holy Names.

The competition season runs from mid-October through early April. Teams receive practice questions at the beginning of the school year and meet once a week with their coaches. There are about 12 meets a season and the top schools advance to double elimination playoffs in April.

The structure of a MasterMinds game has four students from a team competing together over eight minute halves.  At the end of the first half as many as all four students can be substituted. This makes it possible for teams to have as many as eight students play in one 16 minute game. Students must buzz in to answer, with each correct answer ten or 15 points can be earned, a 30 point bonus opportunity existing as well.

On November 8, Berlin sent a JV and Varsity MasterMinds team along with Coaches Matthew Christian, high school Science teacher and Jennifer Overocker, high school Math teacher to compete in their first meet of the 2019-2020 season.

Congratulations to Holly Hermann, Jordanne Brazie, Gabe Hemmindinger, Bridget Hermann, Gavin Bink and Brandon Rifenburg from the Varsity MasterMinds who won their match against Hoosick Falls 145 to 105. They played a good second match against Brunswick/Tamarac but fell short with a final score of 110 to 225.

Congratulations as well to Connor Sniger, Ray Ericson, Austin Meyette, Angelo Capozzi, Riley Smith and Danny Rivera who all competed on the JV MasterMinds team to win their match against Hoosick Falls 140 to 30. The JV also played a close second match against Brunswick/Tamarac until the half but fell short in the second half with a final score of 60 to 165.