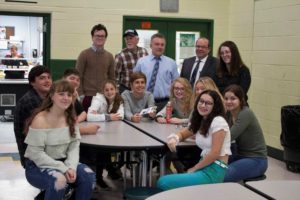 According to organizers of the event those unable to attend were in the hearts of the community that gathered for the morning’s assembly.

The Berlin Middle-High School food service staff cooked up a hearty breakfast spread for the veterans and their families, warming up an icy cold morning.

Near the close of breakfast, the guest speaker, Congressman Antonio Delgado of New York’s 19th District arrived to meet and greet the veterans before the start of the assembly. 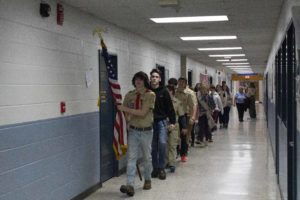 After breakfast, Scouts from Troop 222 escorted the veterans and the congressman to the assembly, where they were met with a rousing standing ovation from the Middle-High School student body, staff and community members.

The Berlin High School chorus under the direction of Middle-High school music teacher and choral conductor Leslie Eliashuk kicked off the assembly with the “Star-Spangled Banner” arranged by Russell Robinson. The chorus also performed “Stand with the Brave,” by Mark Patterson, featuring Math teacher Wayne Cornell on trumpet along with a vocal solo by 9th grade student Connor Sniger.

Congressman Delgado took the stage after the students’ musical tributes to the veterans. He spoke about welcoming our veterans with an open and grateful heart, acknowledging that those veterans in attendance had provided the country with the most selfless and purest form of public service.

“There is a lot of partisanship and division right now in our country,” he said.

“But whenever I need inspiration to stay the course, to stay committed to our shared values, to fight for the greater good and put country before all else, I just think of our veterans and the men and women in our armed services.”

Congressman Delgado encouraged the students, staff and community members to “find ways to give back to your community.” He concluded with, “When you see a veteran, let him or her know how much their service means to you.”

Members of the Super Troopers character education club at the High School did just that through a video tribute that included students expressing gratitude for our veterans’ service, and the reciting of quotes from veterans in attendance telling what their service meant to them.

The assembly concluded with a closing from Superintendent Dr. Stephen Young, who expressed his pride in the students and his gratitude for the bravery and selflessness of the veterans in the audience. See more photos.