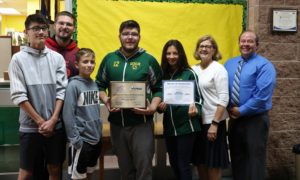 “I was very honored and humbled to accept these awards on behalf of the Berlin Community in front of my fellow athletic directors and members of the Section II Executive Committee,” said Mr. Weaver.

The first award was the Award of Excellence for Exemplary Display of Sportsmanship, Ethics and Integrity presented by the New York State Public High School Athletic Association (NYSPHSAA) and the National Federation of State High School Associations (NFHS).

Mr. Weaver continued, “As an athletic program, we strive to teach our student-athletes how to promote good sportsmanship not only during athletic contests but also during the school day.”

“Our student-athletes are role models for our entire school community and these awards signify the great effort they put in to represent Berlin in a positive way. All of our student athletes should be commended for these awards they helped us receive,” concluded Mr. Weaver.