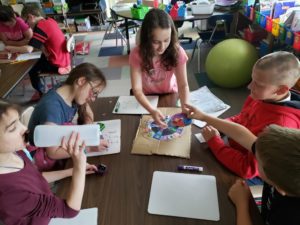 Mr. Turetsky and Special Education teacher Mrs. Wilson’s fifth grade math students recently completed a project based learning unit. The students created their own math games in groups of 4 or 5. This project required teamwork, knowledge of math concepts, and the use of their writing skills.

The groups were tasked to come together with a Math topic and theme. Then over the course of the week, write steps on how to solve the math problems, design game boards and pieces, create the games problems and answer key, write out the game instructions and finally  test the game.

The unit was completed with a Game Day party. This allowed students the opportunity to play each other’s games and give feedback on what worked, what did not and which games they felt were most successful.

“It was a successful unit and a fun way for students to apply the math concepts they have learned this year.” said Mr. Turetsky.

Below is a list of the excellent math games the students created and the concepts they used.

The Soccer Game- Order of Operations

Zoo It Up- Adding Decimals