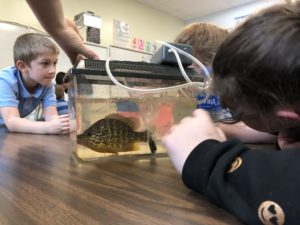 Berlin Elementary’s third grade students took a field trip to Grafton Lake State Park on June 11. The first part of the field trip started back in May with a classroom visit from the park environmental educators.  Park educators, Matt West, Nick Annese and Marcy Downey brought fish to the third grade classrooms to discuss their life cycle and prepare them for what they would be looking for when they arrived at Grafton Lakes. At the State Park, students spent the day learning about fishing, and fish ecology.

Students in Mrs. Peter-Hoens class reflected on their visit to the Park when they returned. Here are a few reflections. 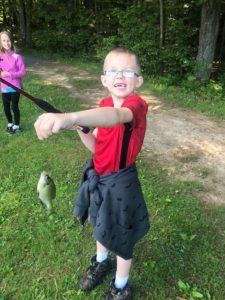 My favorite part about my field trip was that I got to learn to fish.  It was such a great trip. The first thing that we did was go fishing.  I caught 2 fish for the first time. They were both Bluegill Sunfish. I caught them by casting so good. When the bobber started to move on top of the water, I knew there was something tugging on it. So I quickly realized I needed to reel it in. When I did and saw what I caught I was so proud of myself.  If you go fishing at Grafton State Park maybe you will have a fish to catch! 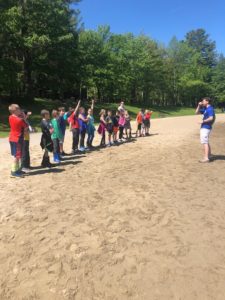 I learned about all kinds of fish like Bluegill Sunfish, Rock Bass, Pumpkinseed Bluegill, Largemouth Bass, Smallmouth Bass, and Yellow Perch.  My favorite part was when we played the fish game and we played on the playground. I played tag and I did an obstacle course, it was fun. Many of us caught a Bluegill Sunfish.  I wonder how many fish live in Grafton? I caught two fish and someone got three!! Baby Sunfish are called fries and they eat plankton. When they’re grown up, Blue Herons eat them!  We made our own fish with adaptations that we colored. The Bluegill Sunfish has black on the bottom and yellow on the top.