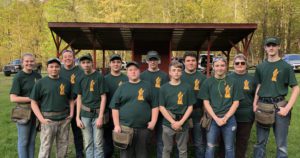 The post was from the Hoosick Falls Clay Target team’s coach, Chris Marsh, who helped get the Hoffman’s in contact with the representative for the league.

Marsh also met with Berlin Central Superintendent Dr. Stephen Young, high school Principal Dr. Cathie Allain, Athletic Director Josh Weaver and the Hoffmans. They discussed the Clay Target Team and how successful it has been for the Hoosick Falls district.

Earlier this year the Board of Education officially approved the club. An open house to get the word out about the new club was the next step. Eighth grade math teacher Nathan Ellis helped get the word out and a co-ed team was formed.

Safety being the first priority of the club, all student athletes and coaches attended a New York State Hunter Education course before the first practice. The coaching requirement for a team in New York State is one coach to every 10 athletes. However, the Berlin team already has 11 volunteer coaches, staff and range safety officers for its 13 team members.

“Being a rural district, students have guns in their home, and this sport teaches them how to safely handle them, use them and learn skills that will last a lifetime,” said Coach June Hoffman.

The team is split in half: one half competes on Mondays at the Berlin Rod and Gun Club, and the other on Tuesdays. The athlete’s scores are submitted electronically weekly to the league. The students can check the league’s scores and see how they fare against their teammates and other schools in their conference. If they so choose, students may participate in the state tournament in Cicero, NY, during the last week of June.

“We didn’t have time to run a fundraiser for our team before we got started, so I went out to area businesses and asked for donations,” said Coach Hoffman.

Coach Marsh of Hoosick Falls passed on accepting a grant from the Brunswick Sportsmen’s Club. Originally donated to his team, the grant was used instead to help start up the Berlin team. Between this grant and donations from local community members and businesses, the team was able to purchase supplies and uniforms and pay the student registration fees.

A fundraiser trap shoot will be held at the Berlin Rod and Gun Club on June 1. Invitations are extended to area sportsmen’s clubs, fire departments, law enforcement officials, and anyone who would like to put a squad of five people together or join a squad to compete. To participate in the fundraiser trap shoot, there is a minimum donation of $10 per 25-shot round of trap. Prizes, can auctions, raffles and food will be available. To pre-register your squad or for more information call June or Bob Hoffman at 518-658-3038.