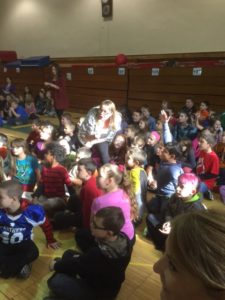 During their monthly assembly, Berlin Elementary students answered questions in categories including being responsible, safe and respectful in the cafeteria, in a style resembling the game show Jeopardy. Kindergarten teacher Kasey Hannigan played the role of game show host.

Principal Tracy Kent picked 10 student names from the Mountaineer Merit bowl. Many of the students picked a prize from the treasure box while others picked free ice cream as their reward. The assembly concluded with Kent announcing the winners of the Mountain Guide and Mountain Climber awards.