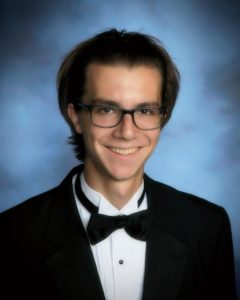 Ioann Popov, son of Oleg and Anna Popov of Petersburg, has been named Berlin High School’s Class of 2017 Valedictorian.

Ioann has excelled in academics, starting an accelerated track in math and science in eighth grade. In eleventh grade, he earned coveted Department Keys for Academic Excellence in Math, Science and Social Studies. As a senior, Ioann enrolled in a Siena College Physics course as well as Advanced Placement Chemistry and a Calculus course at BHS. While managing challenging course loads and excelling academically, Ioann is still able to volunteer his time as a Link Crew mentor and assist ninth graders at BHS.

Furthermore, Ioann has participated in extracurricular activities such as athletics and music. He is a member of the varsity soccer and track teams. In addition to sports, Ioann plays the trumpet and was the Vice President of the high school band last year. He is also involved with the school drama club, the Berlin Dramateers. Outside of school, Ioann is an ordained church reader at Nativity of the Mother of God Russian Orthodox Church and a member of the church choir.

This combination of strong work ethic, character and commitment to school has earned Ioann a spot in both Berlin High School’s National Honor Society (of which he is the President) and the NYS Science Honor Society. He plans to continue his education at Yale University this fall. He is interested in Physics and Applied Mathematics. 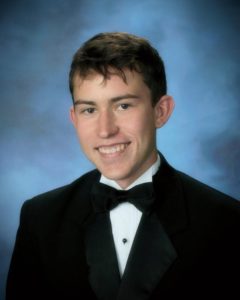 Alexander Flowers, son of Scott and Cindy of Petersburg, has been named Salutatorian for the Berlin High School Class of 2017.

A well-rounded student, Alex has excelled academically, athletically and musically. He challenged himself with advanced math and science courses beginning in eighth grade. In eleventh grade, faculty awarded Alex with Department Keys for Academic Excellence in English, Social Studies, Math, Science and Spanish. He enjoys giving back to the school by tutoring Berlin Middle School students for one hour each week.

Alex has been a member of the varsity track team since eighth grade. He holds the school record in the pole vault with a height of 13 feet and one inch.

Alex demonstrated his leadership as the Student Council President during eleventh and twelfth grade, as well as the Treasurer for the National Honor Society, the Class of 2017 and the Spanish Club. When he is not busy with school, Alex spends a lot of time with his family, especially his younger cousins. During the summer, he is a lifeguard at Grafton Lakes State Park.

In March 2017, it was announced that Alex is a National Merit Finalist due to his exceptional PSAT score. He remains undecided about where he will attend college in the fall, but he is interested in pursuing a degree in Mathematics and graduate studies in Data Science. He attributes his success to the support he received from his parents and the teachers at Berlin CSD.