Maria Gordon (Class of 2013) is pursing a double major in Public Relations and Spanish at SUNY Fredonia. She has been the captain of Fredonia’s women’s soccer team and earned SUNYAC All-Academic honors every year. She spent time in Chile to study Spanish and she volunteered at a children’s home. Maria is also an international education ambassador on Fredonia’s campus and she hopes to work for non-profit organizations on an international scale. For her senior capstone project, Maria is developing a public relations plan for a youth center.

Stephen Pelletier (Class of 2016) attends Hudson Valley Community College where he is majoring in Criminal Justice. He is involved in several clubs on campus, including serving as vice president of the student senate. Stephen plans to purse a degree in law and he has plans to develop a pro bono law program that will allow him to represent clients who could otherwise not afford legal counsel. 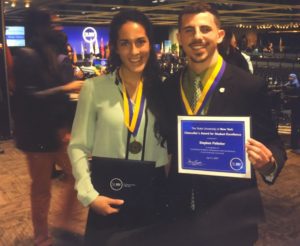 As written in the program, the Chancellor’s Award for Student Excellence “acknowledges students who have received recognition for distinguished achievements. It is the highest honor bestowed upon a student by the University.” The prestigious award is given to students who have demonstrated their “integration of academic excellence with other aspects of their lives including leadership, campus involvement, community service, arts (creative or performing), athletics, and/or career achievement.”