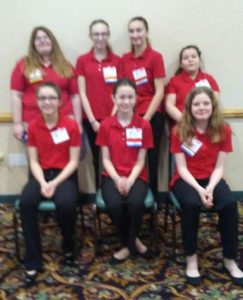 In addition to presenting their STAR Event projects, the FCCLA students enjoyed participating in leadership building workshops, networking with students from across the state and learning new skills to bring back to school with them and help others.

This year, senior Katie Mellett, a former NYS FCCLA Officer, acted as an evaluator for the various projects. The STAR Events are awarded medals based on grades. Students can earn gold, silver and bronze medals.

Riley Smith (6) and Cloey Purdy (6) earned a silver medal and an alternate spot in the national competition for their Chapter Service project, “Mission Possible.” Mission Possible is a “secret” mission to enhance self-esteem by leaving notes of positivity in teachers’ mailboxes, on students’ lockers or by simply performing random acts of kindness.

Ariana Hendricks (8) and Kate Lockett (8) presented their Environmental Ambassador project that compared various gardening methods such as hydroponics, aquaponics, aeroponics and traditional gardening. Hendricks and Lockett worked closely with their science teacher, Ms. Amanda Oligny, on a small-scale aquaponics growing project. They received a silver medal and a slot to compete at the national competition this summer.

Kianna Flavin (8) and Paris DeFilippis (8) presented their project titled “Illustrated Talk on Global Warming and Alternative Energy,” focusing mainly on solar and wind power resources. Flavin and DeFilippis also received a silver medal and the opportunity to compete at nationals