Did you know the Berlin Middle/High School library is infested with sharks? 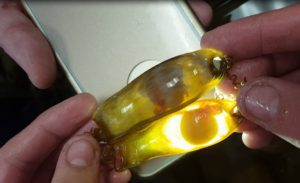 The baby catsharks are clearly visible inside the egg cases.

Each year, students in the Marine Biology course at Berlin MS/HS hatch catsharks from egg cases in the aquariums at the school library. The only course of its kind in the surrounding area, Marine Biology at Berlin MS/HS affords a unique educational opportunity for students to engage in advanced science, design and collaborative problem solving.

Matt Christian, the science teacher at Berlin MS/HS who initially developed the Marine Biology course, said the district has been supportive of the endeavor since he first mentioned the idea during his interview more than 10 years ago. It is a full-year high school elective that incorporates modeling and inquiry-based learning.

In addition to concepts from biology and chemistry, the course is built to include biotechnology components because of the Capital Region’s growing biotech industry. There has also been a recent push from local colleges such as Hudson Valley Community College to improve biotech education in schools.

Students in the course examine how marine biology is connected to the biotech and biomedical industries through hands-on education. They study marine life to learn about concepts such as DNA extraction and fluorescent protein development, as well as solutions, PH stability and how to test water for various minerals and trace elements. 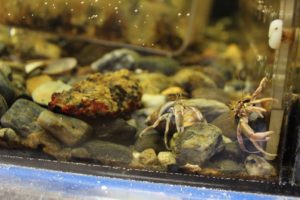 Hermit crabs are among the library tank residents.

The students also manage the aquariums in the school library, which requires advanced knowledge of scientific and technological concepts. Each year they research various sea creatures to add to the tanks. The library aquariums are home to species that are native to Florida and the Caribbean as well as the North Atlantic. In addition to young catsharks, the residents of the library aquariums include corals, crabs, shrimps, jellyfish, horseshoe crabs, hermit crabs, flounder, mangrove trees and sea grasses.

Mr. Christian ensures that all of the species in the library tanks are selected responsibly. 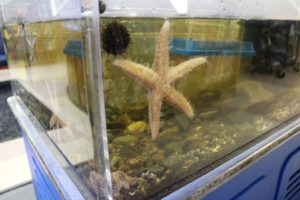 Starfish and sea urchins hang on the side of the tank.

“That’s part of the research the kids do,” he said. “We can’t take an animal out of the environment that doesn’t have a sustainable population. We also send the sharks back to the Woods Hole Oceanographic Institute in Cape Cod periodically.”

Since Rensselaer County is so far from the ocean, Mr. Christian plans virtual field trips to aquariums and other marine biology institutions. He hopes to partner with Via Aquarium—a local aquarium that opened in Schenectady, NY in November 2016—to advise on topics such as bringing up sharks in captivity for more than a few years.

“Keeping things like this alive in captivity can be a challenge,” said Mr. Christian. “The kids learn that. They research sustainable species to add to the tank, introduce them to the community, and not all are successful. That’s part of learning. They have to problem-solve and evaluate the situation, asking what did not work, why it did not work and how it can be improved.”

A recent challenge faced by the class is how to get jellyfish to grow big enough to reproduce. Some solutions suggested include feeding the jellyfish more, changing the type of food and altering the water temperature. Mr. Christian hopes to collaborate with the technology class and build a system specifically for jellyfish.

“Working with a local aquarium would be a great way to provide more opportunities to enrich the marine biology course for our students,” said Mr. Christian.

Thank you to the Maritime Aquarium, Woods Hole Oceanographic Institute in Cape Cod, KP Aquatics, Coral Restoration Foundation, and Touch Tanks for Kids for their expertise, assistance and donations of equipment and marine animals, as well as the Berlin High School Class of 2016 for donating a new protein skimmer and water filtration system.