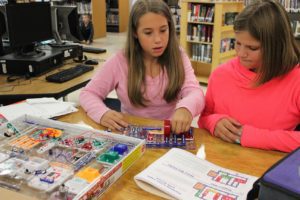 Makerspaces are taking the library world by storm, popping up in community and school libraries all over the country. A makerspace, which is a relatively new concept, offers DIY (or “do-it-yourself”) spaces where people can use a variety of tools and materials to create, invent and learn. Each makerspace is different and can include tools such as 3D printers, software, hardware, craft supplies and electronics. This year, school librarian Ann Hayes is piloting a makerspace in the Berlin Middle/High School library. Hayes did some research, including attending a workshop on makerspaces, in order to see how other libraries were implementing the concept. Based on her research, Hayes selected activities that she thought would work well in the Berlin Middle/High School library. Hayes started on a small scale, using state-aided funding through Questar III BOCES’ Coordinated Cooperative Collection Development, however she is hoping the initiative will grow in the future. 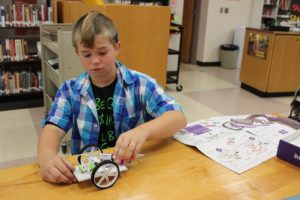 Currently, the makerspace in the BMS/BHS library offers students opportunities to construct things from duct tape or K’NEX, or learn about circuitry and electricity with the Snap Circuits® kit. “It teaches kids different things,” said Hayes. “When constructing things out of duct tape or K’NEX, the kids have to closely follow the instructions but it also allows for some creativity and innovation.” Hayes also pointed out that activities such as the Snap Circuits® kit reinforce science concepts that students learn in class. In selecting the first activities for the makerspace, Hayes wanted some to fit within the important STEM framework—science, technology, engineering and mathematics—while also branching into the STEAM movement, which includes a focus on art, design and innovation. The makerspaces are available to all students at BMS/BHS during their free periods, as long as they have a pass from their teacher. “You can have a break between advisory or have two study halls in a row, where you might sit there or maybe do homework if you have any, so the makerspace in the library can provide a better use of time in some cases,” said Hannah Mace, a sixth grade student at BMS. 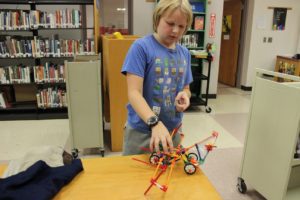 “K’NEX are fun and creative,” said Radley (pictured). “They give your brain a break but you are still doing something that makes your brain work.”

Aiden Radley is also a sixth-grader at BMS who enjoys the new makerspace in the library. During a free period, Radley used K’NEX to build a winged vehicle, then added something to the tail to act as a rudder to control the vehicle’s direction as he pushed it down the hallway. The added rudder did not work as planned, but it nonetheless demonstrated the skills and thought process used by many engineers. 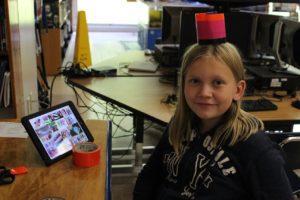 Hayes hopes to expand the makerspace in the BMS/BHS library to include more tools and materials that promote STEM and STEAM concepts such as problem-solving, creativity and innovative design.