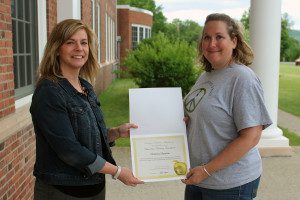 Congratulations to first grade special education teacher Deanna Hansen for earning the NYS Senate Award for Excellence in Teaching. On June 5th, a representative from senator Kathy Marchione’s office visited Berlin Elementary School to bring the news that Hansen had been chosen for the award. BES principal Tracy Kent, who nominated Hansen for this honor, said she demonstrates all of the qualities and attributes of an outstanding educator and that she has had a tremendously positive impact on the life of many students and her colleagues.

As a special education teacher, Hansen is dedicated to the students in her classroom and is a collaborative, outside-of-the-box problem solver who works to ensure her students are successful. She is also equally dedicated to the greater school community and works tirelessly for the benefit of others. Along with a group of her colleagues, Hansen formed her school’s “Helping Hands” committee, through which she works diligently to make sure that all BES students have their basic needs met so they can be successful in school. The committee also solicits donations of winter clothing and provides gifts for families in need during the holiday season. Hansen also runs the BES Food Pantry where, whether running food drives, seeking donations, or doing the actual shopping herself, she ensures that our students and their families do not go hungry. Additionally, she is a member of the Character Education Committee, Shared Decision Making Team, and serves as an Incident Commander during safety drills.

Hansen received a certificate of recognition from senator Marchione’s office as well as a $500 monetary award for her school, which will be used to further the important programs Hansen has championed here in Berlin. Shown here, Tracy Kent presents Deanna Hansen with her NYS Senate Award for Excellence in Teaching from senator Kathy Marchione.