Berlin Elementary School held a school-wide Memorial Day theme day on May 26. This day-long series of events immersed students in patriotic learning activities and brought attention to the service and sacrifice of our nation’s military veterans.

Several veterans visited BES at different times during the day, giving each grade level the opportunity to meet one or more of them. The vets talked to the students about their service in the armed forces, shared photos from their deployments overseas, and answered any questions that the students had. Special thanks to veterans Robert Smith, Daryl Maxon, Robert Jaeger, Betty Schnoop, Dan Schnoop, and John Cornwall for sharing their experiences with our students. 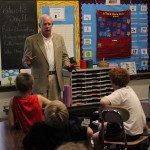 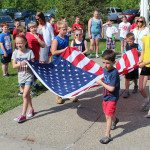 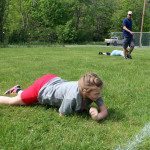 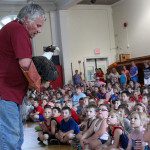 At the school’s flag pole, students learned what the flag’s stars and stripes represent, how to handle, raise and lower the flag with respect,  and the meaning behind each of the thirteen folds that go into a proper folding of the flag.

On the fields behind the school, a “boot camp” themed physical education program emulated a basic training experience where students tried out calisthenics like jumping jacks, ran obstacle courses and foot races, played tug-of-war, and more.

In art, students used red, white and blue, stars and stripes, and other symbols of America to make patriotic keepsakes they could bring home and display over the Memorial Day holiday; students in grades K-1 made paper hearts, grades 2-3 made windsocks, and grade 4-5 painted rocks.

While grades K-3 sang and danced to patriotic songs, students in grades 4-5 learned about the history of bugling in the military and bugle calls like Taps with band teacher Ms. Keem, who is an accomplished bugler.

Students also learned about the bald eagle, the United States’ emblem, through grade-level classroom lessons. They learned facts about eagles, such as adult eagles can have a wing span of up to eight feet! Kindergartners and 1st graders had a chance to compare their own arm spans to a full-sized drawing of an eagle with its wings spread and quickly discovered they were not even close! Students also studied the eagle as a symbol, areas where that symbol can be found, and the history behind how the eagle was chosen as the national emblem because of its beauty, strength, long life span, and because it is a native bird of North America. 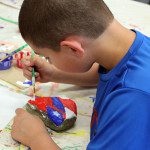 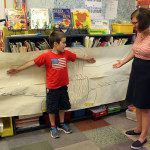 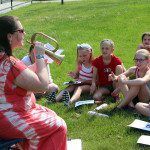 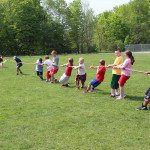 The final event of the day was a school-wide assembly held in the gym, where students viewed a movie version of the book The Impossible Patriotism Project. Following that, first grader Gabe Smith and his family were called to the front of the audience to be recognized and honored. Gabe’s father, Robert Smith, was one of the veterans who had spoken to students earlier in the day. He is currently serving as a Captain with the 109th Airlift Wing and had just returned from a deployment to Germany. Mrs. Kent, the school principal, also shared a video of her brother returning home to his family after his recent deployment overseas. This was a follow up to a presentation Mrs. Kent had given her students last year when her brother was still on deployment. To cap it all off, Peter Dubacher of the Berkshire Bird Paradise Sanctuary brought in an adult bald eagle for the students to see. Mr. Dubacher had covered the eagle’s eyes so it would not be frightened by all the students gaping in awe at it. He talked about how eagles survive in the wild and explained that this eagle now lives at the sanctuary because it had been injured and was unable to be released back into the wilderness. The Berkshire Bird Paradise Sanctuary is located in Petersburg and cares for disabled and injured birds.

With an appreciation for the values and sacrifice Memorial Day commemorates, students and staff then headed home for a long weekend and to observe the holiday with their families.